Why bring the bachelor friend to home

A man brings his best buddy home for dinner unannounced at 5:30 after work.

His wife begins screaming at him and his friend just sits and listens in.

“My hair & makeup are not done, the house is a mess, the dishes are not done, I’m still in my pajamas and I can’t be bothered with cooking tonight ! Why the hell did you bring him home for?”

Husband answers “Because he’s thinking of getting married”
????

There is always another way to solve a problem

There is always another way to solve a problem

Ever since Rob was a child, he had a fear of someone under his bed at night. So he went to a Psychiatrist and told him, “I’ve got problems. Every time I go to bed I think there’s somebody under it.  I’m scared.  I think I’m going crazy.”

“Just put yourself in my hands for one year”, said the psychiatrist. “Come talk to me three times a week and we should be able to get rid of those fears.”

“How much do you charge?”

‘I’ll sleep on it and if needed I will come back to you,’ Rob said.

Six months later he met the Psychiatrist on the street.

‘Why didn’t you come to see me about those fears you were having?’ he asked.

‘Well, Eighty bucks a visit three times a week for a year is an awful lot of money! A friend cured me for $10. I was so happy to have saved all that money that I went and bought me a new SUV”.   With a bit of an attitude, he said.

‘He told me to cut the legs off the bed – There ain’t nobody under the bed now!

FORGET THOSE PSYCHIATRISTS .. GO TALK TO A FRIEND.  There is always another way to solve a problem.😝

Be with your loved one’s in their bad times? 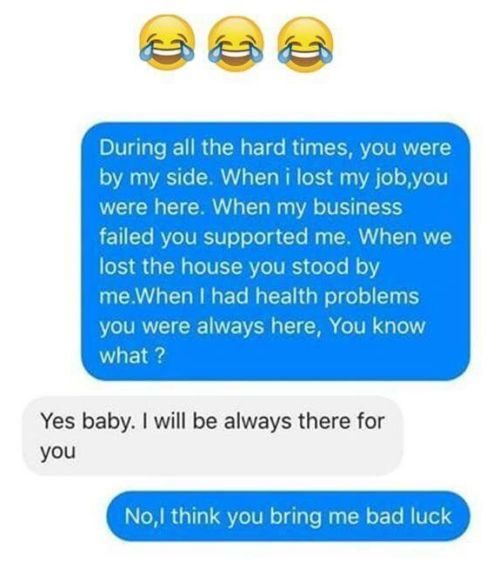 During all the hard times, you were by my side. When I lost my job, You were here. When my business failed, you supported me…

A prayer to God for good friends – fulfilled.

How I feel when my friend is using my mobile phone. 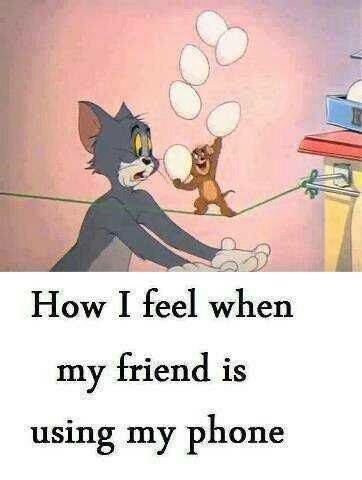 How I feel when my friend is using my phone.